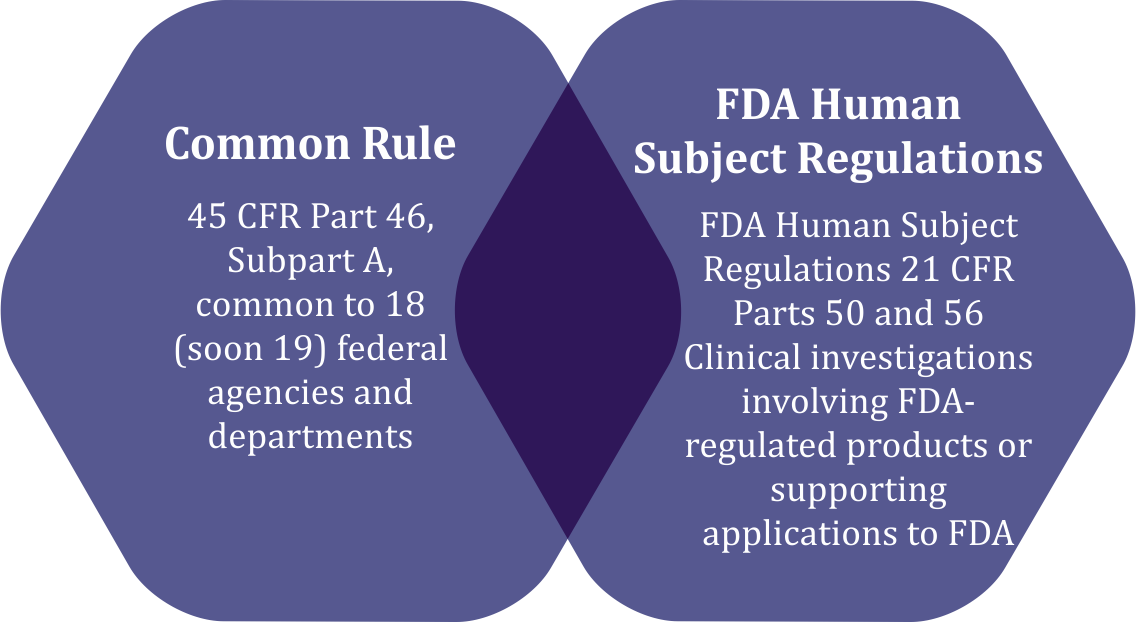 Individuals who are the subjects of research will be asked to contribute their time and assume risk to advance the research enterprise, which benefits society at large. U.S. federal regulations governing the protection of human subjects in research have been in existence for more than three decades. The Department of Health, Education, and Welfare (HWE) first published regulations for the protection of human subjects in 1974. The Department of Health and Human Services (HHS), formally known as HWE. There have been many revisions to 45CFR 46.

Federal Regulations for the protection of human subjects include:

1. HHS Regulations are categorized under 45 CFR 46 and subdivided into 4 parts.

Common Rule – The current U.S. system of protection for human research subjects is heavily influenced by the Belmont Report, written in 1979 by the National Commission for the Protection of Human Subjects of Biomedical and Behavioral Research. The Federal Policy for the Protection of Human Subjects or the “Common Rule” was published in 1991 and codified in separate regulations by 15 Federal departments and agencies

2. Food and Drug Administration (FDA) Regulations can be found under 21 CFR parts 50 and 56.

These regulations are applicable to regulators, research agencies, investigators and sponsors and the regulations will be applied according to the study. Further, there are certain similarities in the existing Common Rule and the FDA regulations such as IRBreview and informed consent. While each of these were built upon the other during development, there are some differences that must be taken into consideration by all stakeholders. Examples include qualifications for exemptions and the requirements for waivers of consent.

Relevant Regulatory Background & History:
The “Common Rule,” also known as the Federal Policy for the Protection of Human Subjects, is the common ethical standard for publicly funded research in the United States.

The Rationale behind changing the Common Rule:

Since the Common Rule was promulgated, the volume and landscape of research involving human subjects have changed considerably. Research with human subjects has grown in scale and become more diverse. Examples of developments include: an expansion in the number and types of clinical trials, as well as an increase in the number of observational studies and cohort studies; a diversification of the types of social and behavioral research being used in human subjects research; increased use of sophisticated analytic techniques to study human biospecimens; and the growing use of electronic health data and other digital records to enable very large datasets to be rapidly analysed and combined in novel ways. Yet these developments have not been accompanied by changes in the human subjects research oversight system, which have remained largely unaltered over the past three decades.
As a result of the changes in the health care industry that were witnessed between 2009 and 2011, the Office of the Secretary of HHS, worked in conjunction with the Executive Office of the President’s Office of Science and Technology Policy (OSTP) to identify needs for updating the then regulations to “modernize” and a make the regulations “more effective.”
A lengthy rule making process was undertaken to: